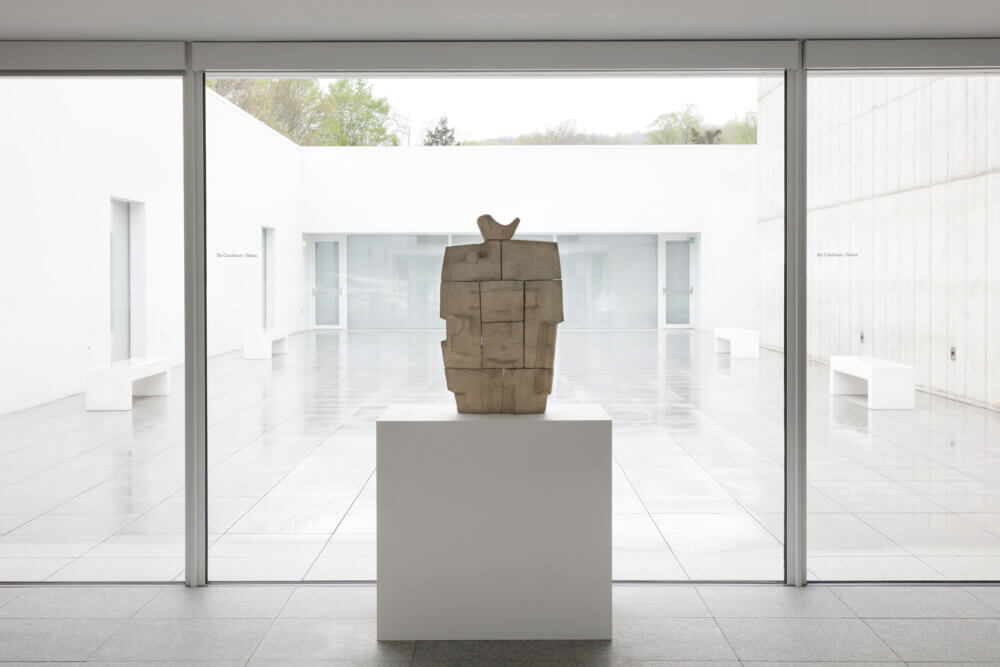 If Alvar Aalto can be dubbed the ‘architect’s architect,’ I call Costantino Nivola the ‘architect’s artist.’ A Sardinian native, he fled Fascist Italy with his Jewish wife, finding himself happily ingrained in the explosive mid-century AbEx New York City ecosystem. He started his career as a painter — yet after sharing his Long Island studio with Le Corbusier, he abandoned the medium for concrete and wet sand, materials he gleaned out of frugality and acute observation of his surroundings: an architect’s sensibility of using place and space.

I first encountered Nivola’s work at the Cooper Union’s 2019 exhibition Nivola in New York: Figure in Field. Over 40 pieces of sculpture, relief, canvas and paper filled the main gallery, offering a survey of Nivola’s genre-bending sand casts in the flesh. However, though it was a treat to encounter his larger-than-you’d-think casts and sculptures within the context of the White Wall Gallery, the substantial accompanying booklet (this is no flimsy pamphlet, but a book fit for your shelf) acted as a borough-by-borough map of the artist’s work, in situ throughout the living breathing urban landscape. Archival black-and-white photographs of the artist’s murals adorning public schools, play sculptures on children’s playgrounds, and even architectural details on apartment buildings fill the pages, and encourage a tour of these works more akin to a game of hide-and-seek. The show invited you to do more than just pass through the gallery, but look up and closer at the city as the artist saw it. The juxtaposition not only completes the context of the body of work, but reminds visitors that you can put Nivola in a frame, but his canvas really was the city itself.

While Figure in Field’s architectural bent was fitting for its architecture school context, it is still very much in conversation with the current Nivola exhibition at the inimitable upstate art collection, Magazzino Italian Art. Sandscapes currently activates Gallery 8, the final stop on Magazzino’s circuitous route through the bright, elegantly proportioned building home to the country’s premier collection of arte povera works. Figure in Field was undoubtedly of and about New York City, but Sandscapes is free and unmoored, and showing exclusively bas reliefs, casts, and sculpture — no paintings or photographs. The monumental pieces are affixed to the gallery walls within white and wood-toned cases, and separated into colored pieces on the left and monochrome black/white/beige tones on the right. To be honest, I think a melange would have accomplished the same delicious conversation, but the separation also didn’t particularly distract, either. Yet your eyes are so calmed when looking exclusively at a field of earthy monochromatics.

Most of Nivola’s gallery-bound works have a fragmented feel, but that reality merely reminds us they’re parts of a larger whole. While today architects may put a Koons in a glass lobby, a centerpiece in and of itself, Nivola’s cast compositions are meant to activate raw surfaces like a collaboration, from his grid of small, Picassoid forms studding the brick exterior of a middle school in Bed-Stuy, Brooklyn, to his heroic cartouche referencing Da Vinci’s Vitruvian Man at a high school in Brighton Beach. You can get up close to many of the casts at Magazzino, cross your hands behind your back and concentrate your gaze, but the fun and meditative spirit of the sand casts spout from the reality that they’re not final forms at all. Sand, plaster, and form are Nivola’s idea of a sketch, a “work on paper.”  They’re iterations on plans for something common in architectural practice: Something Larger, both conceptually and literally.

I think of the permanence of a built work adorned by his sand cast and smile, knowing that people can access Nivola even outside these Gallery 8 walls. But the intimacy of this show is that here, we see the local scale of the artist’s hand, his mind engraved in the grainy material of his exploration. Yet I must say I mourn one omission from the Sandscapes show: Magazzino did not choose to, or was not able to, acquire any of the paintings that speckled the Cooper Union show. The detail and imagination of Nivola’s Twin Towers, New York City (1979), still burns bright in the recesses of my art-memory. A Haring-like frenzy of primary colors, it depicts the insectile figural density of the New York City streets below the iconic architecture — the masses seem only tamed by the pure geometries of the towers and the unifying white chasm between them. Suggesting the Modernist belief in art as changemaker pervades the composition, and the artist’s entire oeuvre. Though the term “public art” wasn’t coined until 1991, Nivola is working with an ancient, political tradition, finding an intersection between art and urbanism. From playful figurines to allegorical casts, Nivola’s works interact with the people as much as with the street, and with a wall as much as with the open space beyond. Through working in fragments, Nivola shows us his nearly invisible, yet intimate spaces between the labels art and architecture.