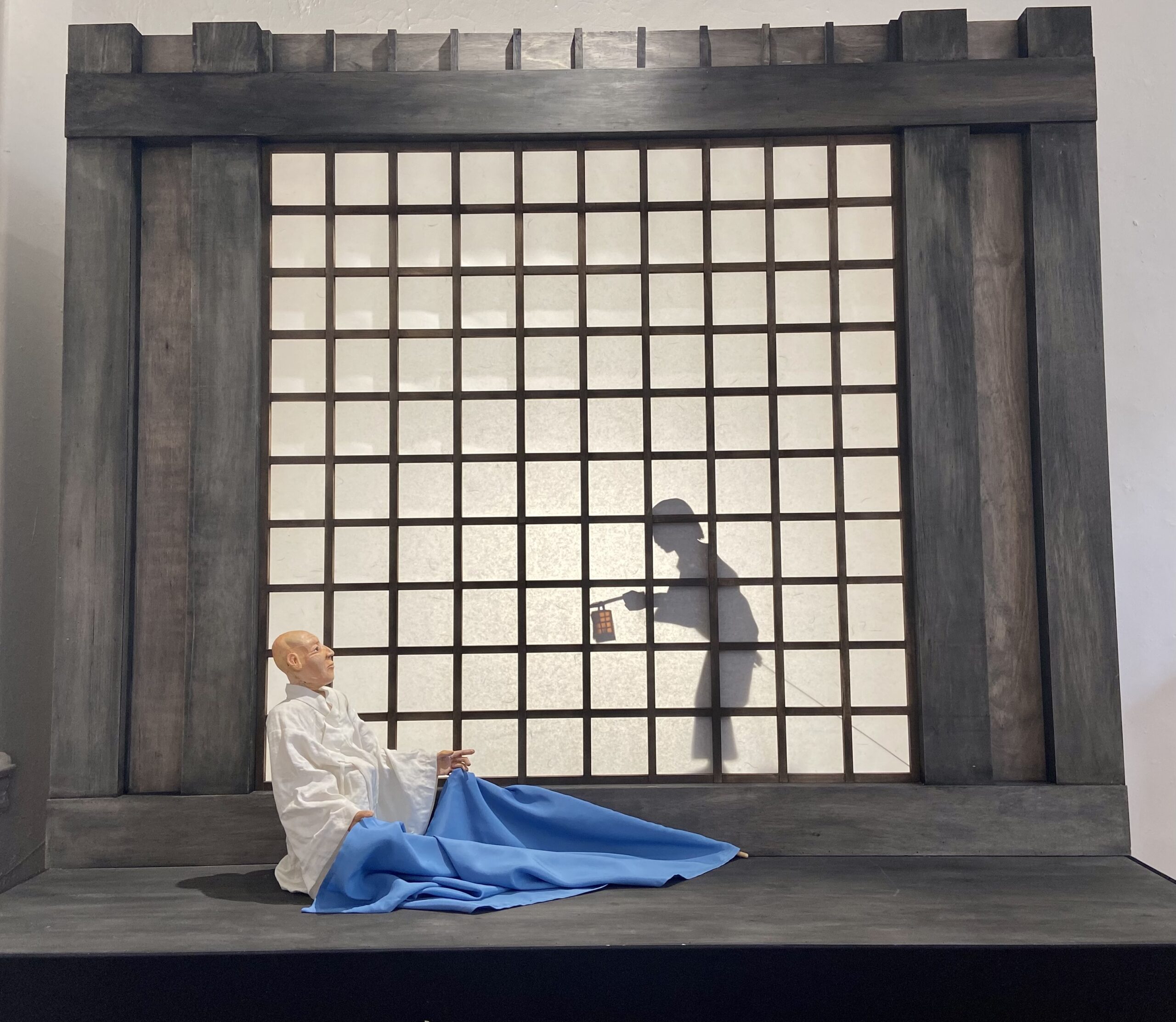 The Clemente Soto Vélez Cultural and Educational Center — The Clemente for short — is a quiet cultural trove. The architecture juxtaposes its clamoring Lower East Side neighborhood, standing proud on the corner of Rivington Street under a sedate, arched stone exterior. Serving as a community center since 1996, The Clemente hosts programs from after-school Capoeira to nonprofit organizations and galleries. When you first enter, it’s not unusual to hear the sounds of a theatrical rehearsal or spoken-word poetry from La Tierra Prometida, a collection written by the center’s namesake that is regularly broadcasted through the entryway speakers.

I attended the current highlights of The Clemente’s summer season: two exhibits presented by the Puppet Fringe International Festival, which places the somewhat overlooked medium’s artfulness on full display. This festival celebrates the art of puppet theatre, which traces its roots as far back as the 5th century BC, and its global impact and practice. Throughout much of August 2021, Puppet Fringe hosted live shows, short films, artist talks, and exhibitions like the ones I visited at The Clemente.

The lower-level gallery did not present the colorful puppet display that I expected after seeing the vibrant Puppet Fringe banners outside. Instead, I was met with a collection of photographs dedicated to the life and work of lifelong puppeteer Vince Anthony. A key figure in the global puppeteering community, Anthony is an artist known for founding the Center for Puppetry Arts in Atlanta, Georgia, in 1978. He is also known for his collaborations with other cultural figures like Fred Rogers from Mister Rogers’ Neighborhood and Jim Henson, creator of The Muppets and Fraggle Rock.

Most of these photographs are black-and-white, and each one is paired with a contextual paragraph and curated to be read in a linear fashion. The images occupy a large space bifurcated by a median which directs the chronological flow of your pacing and viewing experience so that you circumnavigate the space on a winding, curious trail. The space acts as a life-sized timeline immersing the viewer within Anthony’s accolade-laden career.

The photographs date back to the 1960s and continue through the 2010s, featuring Anthony with collaborators and puppets on various stages, sets, and productions. Anthony has received several awards, like the Georgia Arts & Entertainment Legacy Award and the President’s Award from Puppeteers of America. His career is as lengthy as it is global; he currently works for the Union Internationale De La Marionette (UNIMA-USA) as a puppeteering representative for over 80 countries.

After Anthony, I made my way upstairs to the Abrazo Gallery dedicated to the physical world of puppet performance across cultures, media, and time. Within this exhibit alone, there are cloth puppets, mobile sculptures, anthropomorphic marionettes, and two-dimensional shadow puppets. Certain pieces are a few inches tall, constructed with paper, and operable by pulling near-transparent strings. Other puppets are life-sized, constructed with metal and miscellaneous objects, and require a puppeteer to pilot them from within.

Each immoble display requires a few square feet of gallery space, enough room for you to immerse your gaze into each unique story frozen in place, like a snapshot. Yet the close of the exhibition gives us a glimpse of the puppets in their natural, active state. A twenty-minute looped video plays scenes from each performance chosen for the Fringe, bringing them to life if even just for a few frames. The recording combines all the elements of puppetry — the puppets, puppeteers, actors, stages, and sets — in motion, so that we leave with an active understanding of the symphony of puppetry at work.

One exhibit piece features puppets from the 1998 performance Kwaidan, by Ping Chong, an American contemporary theater director, choreographer, and installation artist. It has roots in ancient Japanese folklore and uses a style called shadow puppetry. A three-dimensional puppet in the foreground, meant to be the priest Muso Kokushi, converses with a two-dimensional figure in the background, behind a silk screen grid, a divider common to Japanese architecture to this day, rather than “on stage.” The silhouette is the eldest son of the house that the priest is visiting. The original production illustrates three Japanese ghost stories kept alive via oral tradition —  The displayed selection of this show is from “Jikininki,” the story of a corpse-eating ghost. The choice of shadow puppetry for this production enhances the otherworldly tone of the performance, the silhouette being nearly as immaterial as the fictional apparition.

Humans can easily project autonomy onto a moving object, especially if that object is anthropomorphic. Puppetry utilizes this tendency, presenting imperfect or incomplete representations with the freedom of knowing that audiences will suspend disbelief and fill in their own gaps. At times, the puppeteers wear the puppets and even speak for them. Yet there are  times when the puppeteers are hidden, or costumed so as to blend seamlessly into the background, invisible save for the sculptures they animate.

Another scene that moved me displays puppets from the 1998 show Golem. Conceived, written and directed by Vít Horejš, the scene features waist-high marionnettes wheeled and spun across the stage by visible puppeteers. Similar to Kwaidan, this production is based on an ancient legend in the Czech-Jewish cultural tradition. Golem is known as a giant robotic-clay figure who comes to life in order to protect citizens of Prague. A combination of wood, metal, and cloth are used to construct the Prague villager avatars. I conjecture that the choice of medium is manifold and partly serves to familiarize the viewer with the concept of hybridity, which in turn is the essence of the titular character. The actors in this show are dressed monochromatically in order to draw minimal attention from the wooden puppets of muted hue.

This display, much like the entire exhibit, presents a form of puppetry that I had not considered before. These marionettes are controlled from behind and above rather than from below like the elementary cloth and sock puppets I’m more accustomed to seeing in popular media. Furthermore, they possess multidimensional mobility due to their strings, wires, and wheels granting them a range I had never before witnessed in puppet theater.

The art of puppetry is more than just the figures we see on stage. It includes multifaceted combinations of sculpture, writing, acting, movement, and painting. Though it is not a mainstay medium in traditional art museums or commercial gallery spaces, the Fringe Festival reasserts that it is an art form that traverses age, language, and many layers of cultural boundaries. The artisans from the Puppet Fringe International exhibit have harnessed something as rudimentary and ancient as puppetry and reintroduced it in countless innovative, contemporary ways. The LES and Abrazo Gallery exhibits pair well together by first bringing the viewer into the world of puppeteering by way of a two-dimensional, spotlight exploration into Vince Anthony’s legacy and later revealing a multimedia, interdisciplinary extravaganza on the upper level. These exhibits and Puppet Fringe International as a whole continue to do the important work of revealing the sophistication of puppetry to the general public in an educational and entertaining way.

Taylor Custis (@onlytayyy) is a recent graduate of NYU where she made her own major because it sounded like a cool thing to do. She enjoys stories of all kinds, ethnic foods, and spiritually charged candles. She is currently in Queens embarking on a career in written and visual storytelling.