Power in the Streets: In conversation with SoHo Renaissance Factory 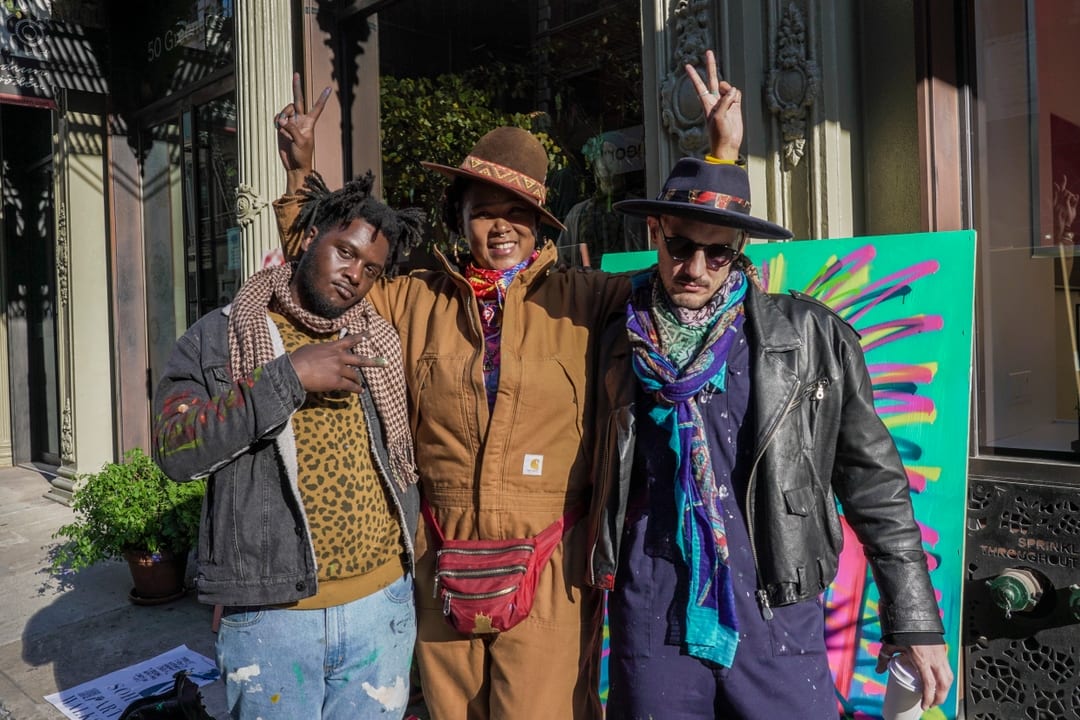 Power in the Streets: In conversation with SoHo Renaissance Factory

Konstance Patton was walking the streets of SoHo when she picked up the Zoom call on her cellphone. Apologizing, she said she’d have to call me back in five minutes, as she was headed back to the studio to charge her dying device. She and her new art collective, Soho Renaissance Factory, had been in the streets all of Election Day, painting on the reappearing plywood boards covering the plate glass windows of the neighborhood’s luxury storefronts. Though colder than the beginning of June, when the plywood first went up in the wake of the BLM movement, the energy in the air was palpable for Konstance and her collective members. It was the same energy, the same feeling of get out there and seize the moment, create the narrative, that facilitated their meeting and organization in June.

On the eve of the general election, Konstance, Amir, Trev, Manny, Brendan settled around a low table in their SoHo studio space, surrounded by folding chairs, benches and leather loveseats. Sule Zoom’d in from Uptown, where he was voting. They all agreed to halt their work for an hour to speak with me about the emergence of their collective, what street art means to them and today, and what’s next for the art world as we know it, post-election and post-pandemic. ‍

Emily Conklin: So, how did you all get to NYC, and why have you chosen SoHo as not only your home base, but the namesake of your collective? ‍

SoHo Renaissance Factory: We’re from all over, I’m from Detroit [Konstance] but we’ve got guys from NYC, born and raised in Brooklyn, Ohio, etc. We all came here for the vibrant art scene, the opportunity to follow in the footsteps of artists before us who shaped what our visual culture is today, and moreso, what our work has become. Including “factory” in our name is sort of a nod to Andy Warhol, a great veteran of this same neighborhood, who changed the game.

But of course our acute meeting point was the boards over the summer. When it was all suddenly plywood in the windows, broken glass on the sidewalks, there was an anarchic energy. I’d been quarantining for what, four months? and I was rusty! But I brought whatever paint and brushes I had and sometimes that wasn’t a lot, and I’d be like “okay, today we’re just using red and purple,” or I’d maybe get to share with some of the artists nearby. And that’s how we all met here, painting side by side, just throwing up our emotions and thoughts in the heat of the moment. It was really powerful.

I was invited [Brendan] to come “work in SoHo” by a coworker of mine, and I thought to myself at first, SoHo? I must be assisting some big name artist. SoHo has this really looming air of elitism and wealth now, since downtown “cool” emerged and the rich came in for the lofts and low-rent housing that was previously so overlooked in the post-industrial factory district. The galleries, or many of the good ones, moved off Broadway and into Chelsea or the Lower East Side, and what’s left or what has morphed is an odd, mostly commercial sect of the art world. Basically, I never thought I’d come to this neighborhood and have the opportunity to make real, authentic work on my own terms. Using my own brushes, the work didn’t have to be finished and polished like those professional murals you see on the sides of luxury high rises.

We know these boards are temporary, so we don’t want to pour like, over 8 hours into them, you know? Instead they just encapsulate a moment. And that’s what people love.

[Amir] They do! I even saw a woman walking her dog today, an older woman so enthusiastic about our work. She asked me, “Are you painting all day today?” I said no, probably around 8pm or so, and she just smiled and was ecstatic and said “well, I’ll be here then.” It’s like we’re staging performances. This authenticity is something people are hungry for, not a stuffy professionalism, like the art world mostly offers today. ‍

EC: How do you feel the street art scene has changed in recent years? And what do you think of the phenomenon of corporate interest in this vein of public art? ‍

SRF: Of course, at the end of the day it’s always an industry. The art world’s recent embrace of graffiti, street art, murals… it’s all an opportunity to advertise if they use it right. But what remains exciting about street art and mural work for us is that it’s out in front of people’s faces, right where we want our work to be, to live. It’s a glimpse into the future of the art world, outside of the red tape that separates the public from museums, galleries and auction houses. The people want it, they’ve even gone so far as to take our work off the windows prematurely before I had the chance to archive an image.

We’ve all actually had a lot of our pieces taken. At first, we thought it might be the businesses themselves, like Nike reopening on Broadway. But they weren’t reopening, and our work was appearing all over the place online either copied or attempting to be sold or displayed in someone’s room. ‍

EC: The concept of archiving, or recording this moment for the future, seems to be a common thread. While street art is inherently impermanent, how do you feel about that factor? Especially your art being a core element of the BLM movement’s longevity?‍

SRF: Oh, we’ve all had our personal street art practices for some time now, and we definitely understand the transient nature of a mural or a piece you throw up. My thought is, after I put up a piece, it belongs to the street now. I walk away and I have no control or urge to preserve it. But now is different. We’re embedded in this movement, and our work is meant to be seen, heard and remembered. We’re actually the subjects of a documentary right now, about the movement. So the crew is capturing not only our work, but the process of making it, on film. And that will endure.

But the thing is, even with this moment, the boards are still not meant to be perfect autonomous canvases. We see mostly-empty boards all the time, where an artist might have placed just a small-scale image, and we see an opportunity to collaborate. There’s been several times we asked around the neighborhood to find who the board belonged to, and for their permission to fill it with something of our own to complement it. So in that way, we keep the street a layered place. This plywood isn’t meant to be a soloists showcase, it’s a mish mash of all our different yet similar ideas coming together in one place.

EC: Beyond the boards, either in June or today, with the election, what is your vision for the SoHo Renaissance Factory as a collective? ‍

We have big ideas. While a lot of the summer artists came and went, we organized. And we organized with the intent to keep this collective moving even after we’re gone. Amir has been working really diligently on an educational angle for us, inviting people in for classes, workshops and demonstrations. We actually kicked that off on Halloween, before the SoHo Art Walks. I actually started my career as a teacher, and while I was appalled by this country’s education system and its lacks and challenges, a core takeaway I have from that experience is that I believe in beautification. I was telling my kids, “This is your school! You can make it a beautiful place to be.” Even though there was almost no art program, and no displays, we put up art in trophy cases, even on the ceiling. That’s the sort of values I have for this collective too, and why we’re also working so hard on securing funding for our fellowship.

The fellowship is huge, really. It will keep people in this studio space, and collaborating with our sponsors to make real, unfiltered art. Yes, the word “unfiltered” seems really important. There’s no veneer of commercialism, no showing off. It’s pure, unfiltered thought and technique in real time. We know of so many artists coming up, coming to the city for the first time, looking for a way to solidify their place in our community. We want the fellowship to be that stepping stone for them, and to keep the authentic art community alive in SoHo.

Our art really isn’t the sort of art you would write about in your university dissertation. But that’s because the art world is shifting. People crave authenticity and a spiritual connection. The Renaissance in our name is a nod to this trend. What does a theoretical, or cynical or ironic piece do for the world if people can’t understand it, can’t connect? If the art establishment doesn’t allow it to be accessible and shared? We’re at the forefront of this change, this switch that the world really needs from institution to community. And that’s an exciting place to be.