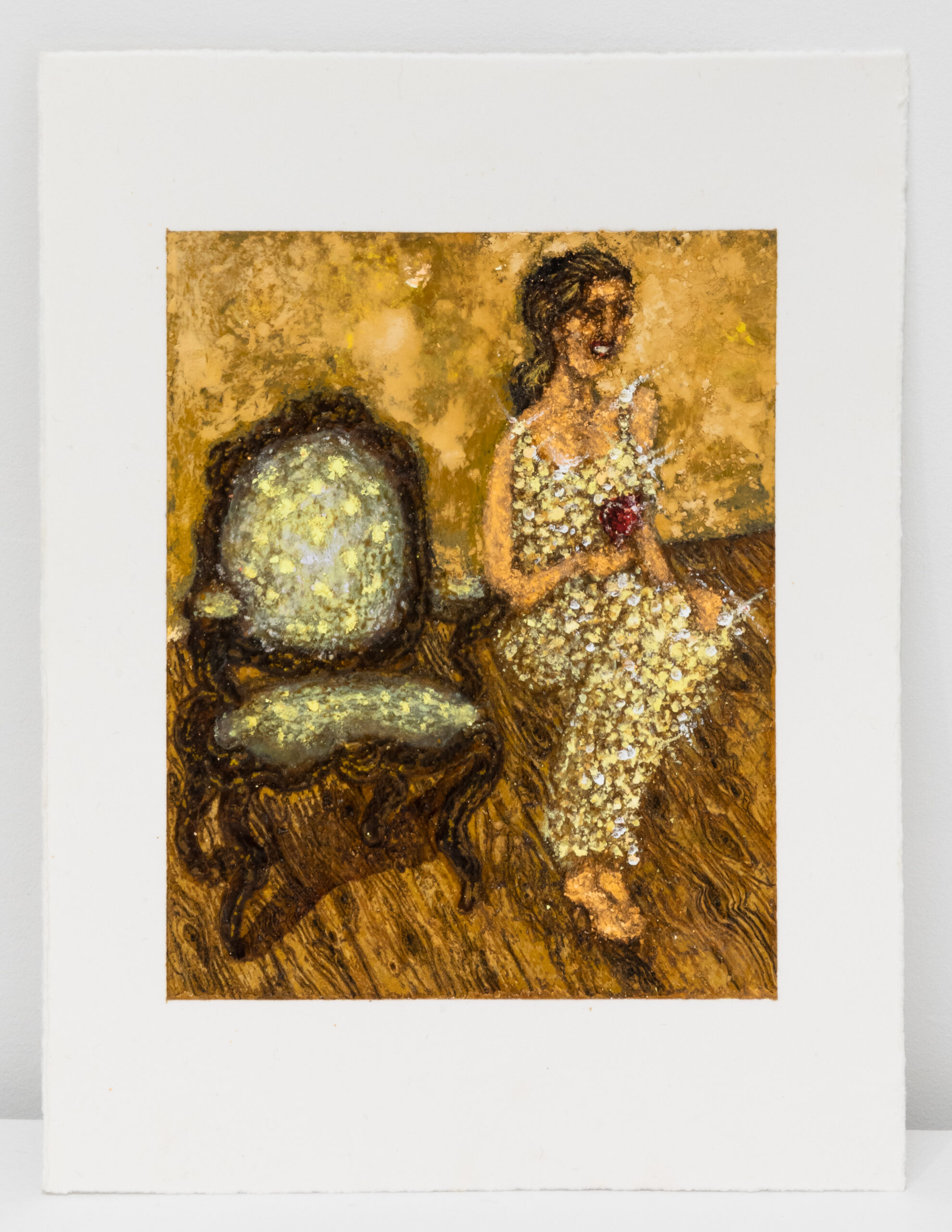 Tucked into a stripped-down space in the upper reaches of a building beside the High Line, Hesse Flatow gallery displays Plum Cloutman’s work almost in secret. Not actually, of course—the U.K.-based painter and printmaker’s solo show has been quite popular thus far. But the out-of-the-wayness of the space, which involves a five-story ride in a brass-plated elevator, is conducive to the reveries of the work. The young artist’s paintings sparkle like gems, and emerge from their surrounding whiteness with a hushed exhibitionism. They evoke, in a city full of art that clamors be seen, the quiet intimacy of a private encounter.

Each of the sixteen paintings in “Emergency,” Cloutman’s current show at Hesse Flatow and her first in the United States, depicts a private scene with beguiling intensity. The spatial configuration is tight, as if seen through a keyhole; though every piece includes, in some form, a human figure, we see little more than a single wall behind them and the furniture they conspire with. These glimpses are more complex than they initially appear, with little games of perspective and arrangement playing out inside whorls of paint. Cloutman composes her works with a combination of pastel, oil, and watercolor pencil—the mesmerizing result of this mélange is foggy, textural, glistening. In the most literal sense, what we see before us is obscure. Displayed flat on tables in the Hesse Flatow space, these scenes are easy to examine and difficult to exhaust.

One of the remarkable through-lines of Cloutman’s style is the way the gilding of a frame or knotted wood of a mantle is more explicitly rendered than the features of her subjects’ faces. While sometimes delivered to us in a direct, albeit cloudy regard, her imaginary sitters feel most alive when somehow obstructed: turning to face a door, for instance, or seen—as is the case for several works in “Emergency”—regarding themselves in a mirror. The apotheosis of this technique can be found in Fish Mirror 3, 2021, a piece which is almost instructive in its simplicity. A large fish is laid out on a cutting board in vivid detail, each of its scales dazzlingly etched, the grain of the wood sharply composed. In the midst of this, what at first appears (especially in situ) to be the sheen of the scales gradually transmogrifies into the face and breasts of a naked woman, seen sideways, the rouge of her blush a shade brighter than the red of her lips, the blue of her eyes just the faintest of daubs. The fish eye, by contrast, is defined with an objective precision—because the fish is dead. It is an object. The human figures in Cloutman’s work, by contrast, blurrily reject their objecthood, even when they are being looked at or looking at themselves. Their indistinctiveness is a result of their own subjective imprecision.

In Upright, 2021, a figure sits with hands crossed at a piano. While it is possible to read the notes of the sheet music directly next to their head, we cannot tell whether this person is male or female, young or old, happy or sad. More information about them is relayed by their posture than the details of their face—and more knowledge still is contained, somehow, in their matching white pajamas and bright blue socks. These details cloak, literally and figuratively, the smudges of personhood. Their externalities are all we have to guess at their interiorities. Like staring at strangers, we may interpret much from Cloutman’s characters without knowing anything for sure, and must resign ourselves to the fact that we shall never see more.

What makes her work so rewarding, then, is the accumulation of objects and textures which she so masterfully renders in her distinctive technique, and the promise of knowledge they convey. In Two Pints, 2021, a figure (also in matching pajamas) lays two jugs of milk on the ground, while behind them a red-robed arm reaches through a window to pick at something on a plate. The perspectival strangeness of the arm, which seems to reach out from a space where, next to it, an open door reveals an empty hallway, makes this the most directly Surreal of Cloutman’s works here, reminiscent of Magritte. Waiting Room, 2021, similarly depicts a situation that becomes odder the longer you look. Three figures sit on green couches, nearly out of frame, flipping through magazines laid on a coffee table. The magazines (one of them, closed, says the word SHOE! on its cover) depict female body parts and faces, which are cropped so close that they fill an entire page, exactly the same size as the faces of the people in the room. These heavily made-up visages stand in sharp contrast to the muddied expressions of their readers—Cloutman often uses makeup to define her subjects—and in even sharper contrast to the face in the waiting room door, a woman in a nursing cap, who appears so dark and obscured that she can signify only an ominous portent. Her facelessness rings out against the masques of the magazines, and the juxtaposition is thrilling and weird.

My favorite paintings of Cloutman’s are ones which broadcast themselves immediately as strange, particularly Liberace in a Mid Century Modern Apartment, and Relaxing in Bed with Four Small Fires, both 2021. In these instances, the titles really say it all, and being left to their obviousness one is free to appreciate the sumptuousness of something that will never be explained or deciphered in full. Cloutman’s patterned surfaces are rich and rewarding, and she is generous with them. Particularly in her more traditional art-historical stagings, such as posed portraits and charming boudoirs, one senses the mind of an artist who is unpretentious and eager to please, more interested in providing something beautiful to look than communicating a profound or polemical or simply self-indulgent point. This is a simple but surprisingly uncommon premise for artmaking today, particularly in a neighborhood of galleries all striving to distinguish themselves, in a city full of art which clamors to be seen.

Nolan Kelly (@nolankelly_) is a critic, writer and media theorist based in Brooklyn, New York. He studied media and creative writing at The New School, and his work has been published in Hyperallergic, The Brooklyn Rail, and No.3 Magazine, among others.