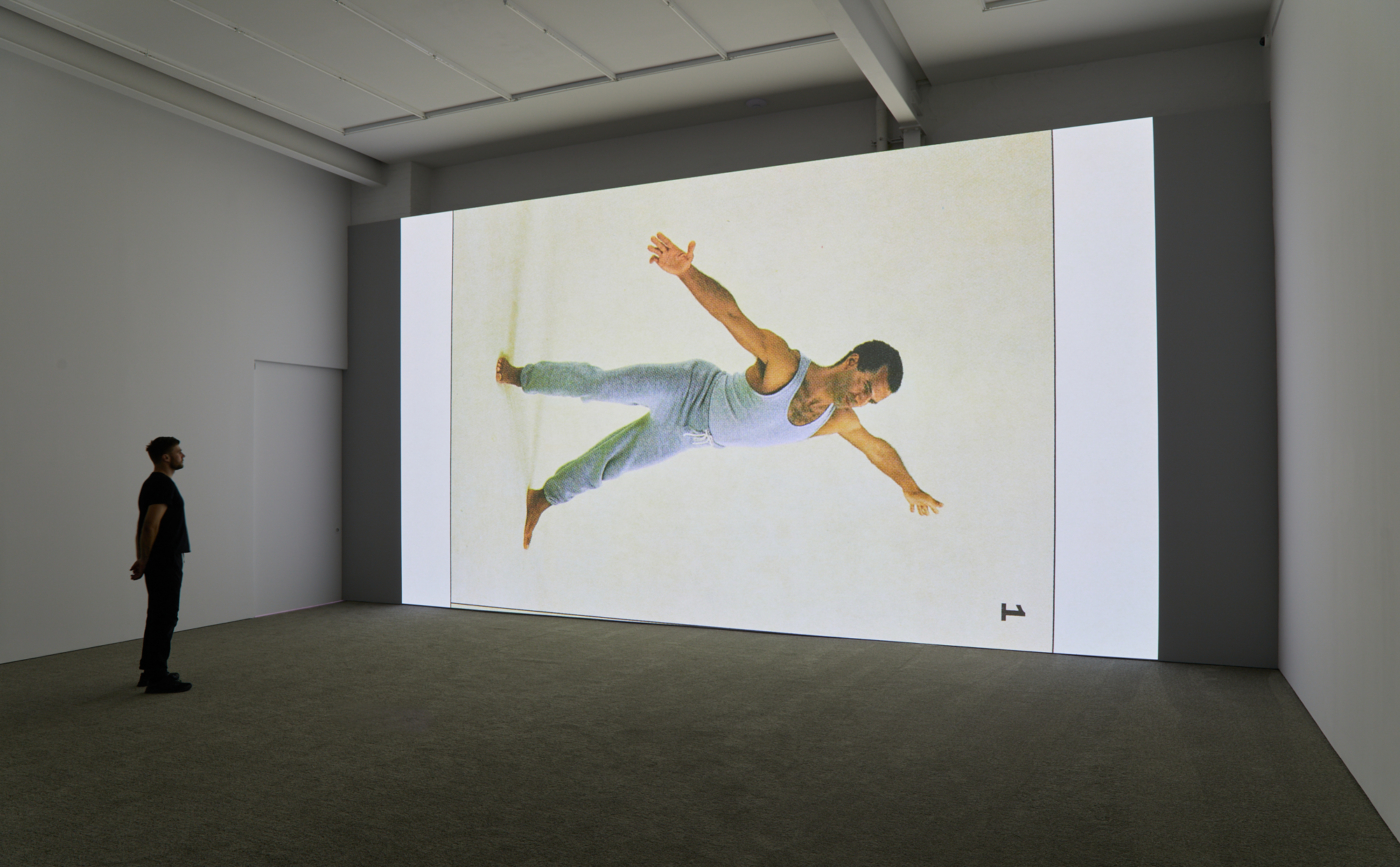 In the 1970s, the artist Richard Prince was working in the tear-sheet department of Time/Life publications, where he began the portentous act of keeping personal copies of the advertisements he had been tasked to register. Photographing the pages with slide film, Prince documented the pictures as though they were objects or artifacts. He would later crop and blow up the advertisements to poster-size, excising text and teasing out motifs which pointed to damning and compelling truths about our visual culture. Often concerned with the presentation of masculinity and femininity, Prince’s prints helped usher in the Pictures Generation, an era of postmodernist Pop concerned with the tyrannical authority of the image in contemporary culture. Together with artists like Cindy Sherman, Louise Lawler and Robert Longo, Prince’s movement produced some of the 20th century’s most incisive and nuanced critiques of mass-media—critiques which, making the most of Warholian irony, the artists often preferred to provoke from inside. Their work also represents the last recent instance in which a discrete aesthetic movement grew into an era-defining style, as though ever since their peak in the 1980s (when Longo’s ”Men in the Cities” series became emblematic of the entire zeitgeist of Reaganomics) the art world has never quite known where it is, where it’s headed, and what it likes best. Has the avant-garde ceased to advance over the past 40 years—in any direction? If so, perhaps art exploring the Pictures Generation can help us learn why.

Time/Life, Mungo Thomson’s current show at Karma, is not overtly related to the work of Prince, and Thomson would probably disown direct allusion. But his work is a study of images through image, and it sources from the same material out of which Prince once clipped. What these two artists do with said material—namely, commercially-sanctioned images from the 20th Century’s largest repository of mainstream visual culture—shows everything about how they are different in temperament. These are differences of intention, but they are also about time—the distance of time, and the sentimentality that clouds our vision when we look back at something lost.

Though Thomson’s work is imbued with the fascination of study, it lacks a sense of criticism about the material it reuses. Seven single-channel, stop-motion videos play on a continuous loop through Karma’s 2nd Avenue screening space. Their subjects, which are entirely limited to images from guides produced by Time/Life between 1961 and 2001, are divided into chapters by theme: Foods of the World, Animal Locomotion, Flowers, etc. Thomson’s style is positivist, epicurean, clinically psychedelic. At breakneck speed, the artist throws his images against bright, staccato percussion. No single picture stands out, and none are seen long enough to provoke contemplation. What pervades this show instead is their sameness—their overriding themes of color and texture. Thomson has made a digital artifact about the joy of print media.

Before the advent of digital photography, the image was limited to objecthood. Prior to the LCD screens of early cell phones, computers, and digital cameras, there was only the screen of the television, the images on which stampeded forth in fluid motion. A still image was an item to be held in one’s hand, made of some kind of material and capable, like all tactile objects, of getting broken or lost. To produce a picture, one had to engage in a physical, chemical process—not just on the side of development, but in printing—so that the creation of the image always involved, on some level, not only the taking but the making of it. Only within the past three decades has this physical process largely been discontinued, and the eternality of the image ordained. 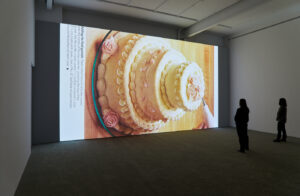 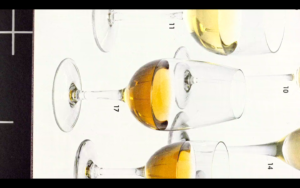 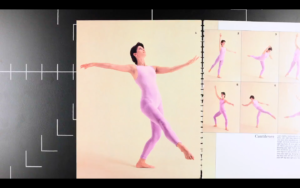 Thomson’s show contains a tremendous glut of images, all of which bear traces of their making as printed material. As with Prince, he seeks to document them objectively, cropping and centering the pages of his guide to clearly depict a sole subject, rather than interlocking visual/textual information. The Time/Life guides to food, art, exercise, and travel were attempts to be encyclopedic about the world through pictures. In this way, they predicted the internet, which, as the 21st Century’s repository of visual culture (mainstream and not), dwarfs all its predecessors to an unimaginable degree. Though Thomson’s videos feel exhaustive, sometimes surprisingly long, they are never exhausting; their journey through the representation of a subject serves only to show the guides’ limitations at showing it. Here, he harkens back to a period when the general was still specific—when the exercise images of Animal Locomotion, for instance, attempt to depict all possible stretches and exercises using only a handful of models with nearly identical body types. Foods of the World replicates the guide’s earnest interest in trying to include every dish ever conceived of—but their plating is consistently fussy and baroque, in the way only a mid-century recipe book could be. This is no longer how the world looks, or how we see it. Thomson’s videos thus feel inevitably haunted, shot through with sensations of something irretrievably lost.

Often, at seemingly random moments, the artist will zoom in on his cropped and centered images, burrowing down to their CMYK print-marks. This gesture to process, a reminder of tactility, becomes crucially demonstrative of his interests. The pictures themselves are of capitalist, materialist bliss—control of the body, veneration of the commodity-object—and, unlike with Prince, they never seem satiric. Each is the picture of banality itself; in the years between 1961 and 2001, each would represent America to itself. But the world has grown more complicated since then, and we have found more diverse, less controlled ways of seeing it.

Thomson’s dedication to his source becomes high-flying in Foods of the World, moving past a survey of examples from the guide and going into raptures about the guide’s own objecthood. As if distracted by something out of the corner of one’s eye, the vertical imagery of the camera shifts over and down, to capture not only the images on the guide’s pages but the pages themselves, as they turn over and over on their spiral-bound spine. At several instances, we watch the page numbers as they climb and retreat. In a few shocking moments, the artist even breaks the fidelity of the page-image entirely, and begins photographing the book from an aerial perspective, as it spins upright around its spinal axis. The photography here is still static and detached, like the official documentation of an artifact, but the stop-motion onslaught gives the strange impression that the book is now upright and dancing. But in such moments the artist reveals his true interest: nostalgia for the page, and for an age when information was still limited to it. 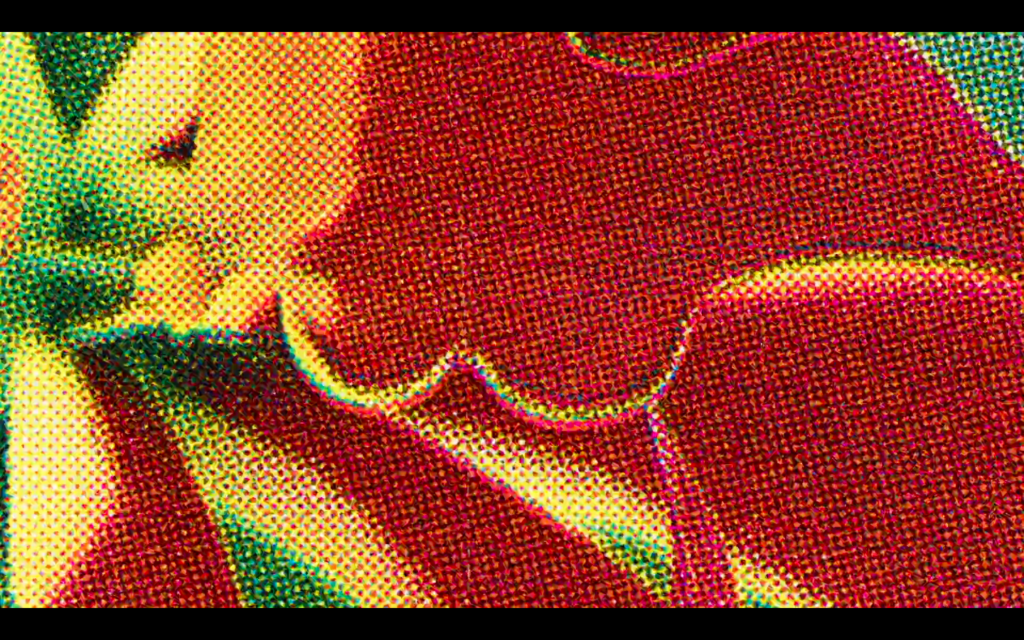 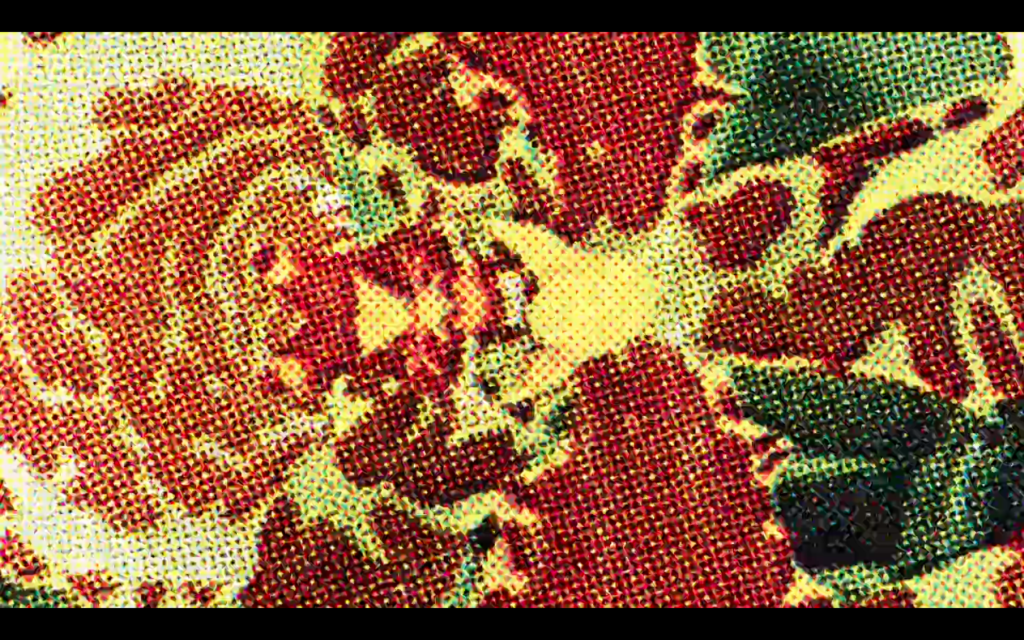