Glimmer in the Slick: A Meditation on SOPHIE’s Legacy 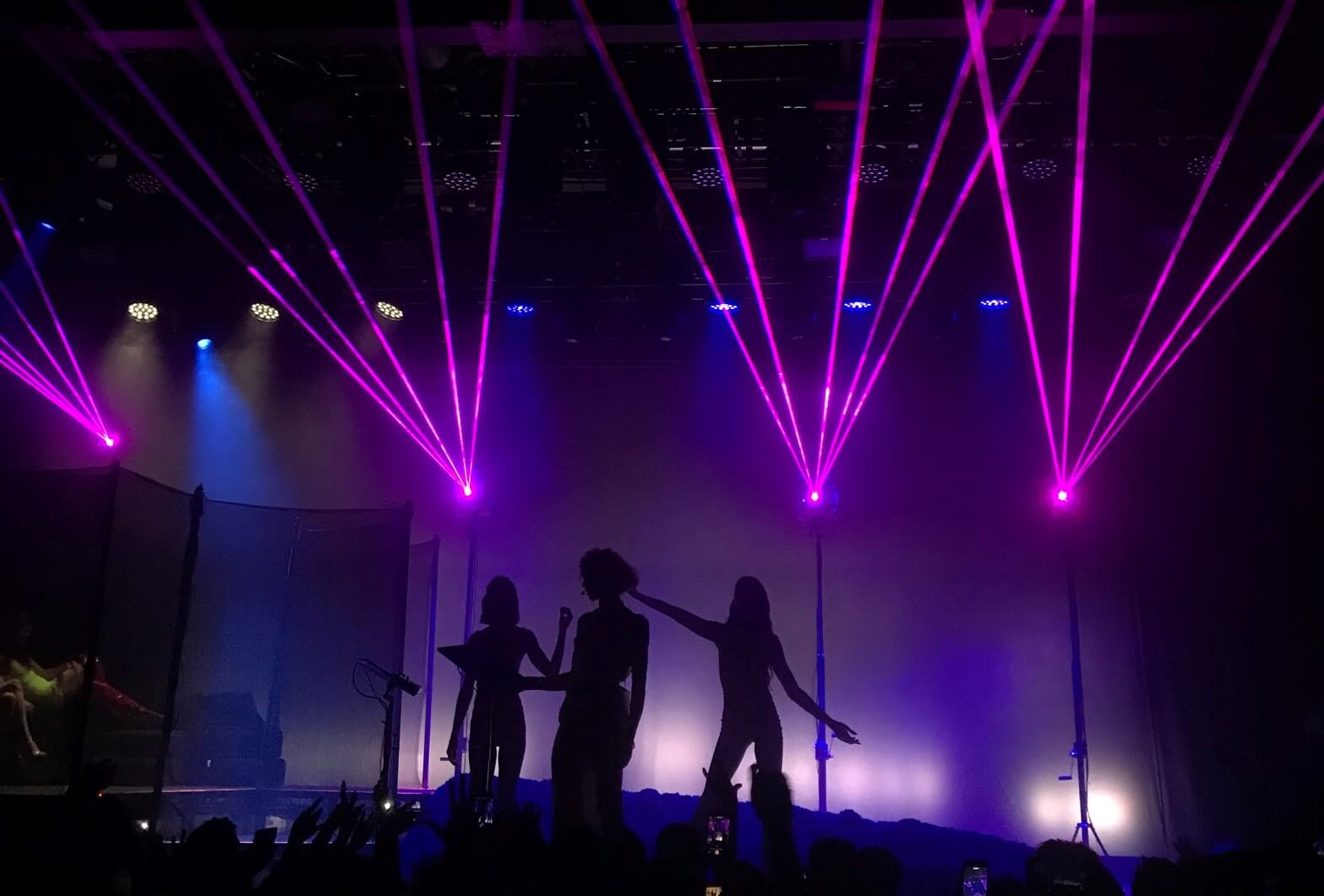 Glimmer in the Slick: A Meditation on SOPHIE’s Legacy

The first time I heard SOPHIE, a couple of friends and I were driving around aimlessly and blasting a few of the singles that would appear on her 2015 compilation record Product. I’ve always been an avid pop listener, and I’d grown exhausted of the recurring trends in the mid-to-late 2010’s mainstream: minimalist beats featuring un-ironic, over-auto-tuned vocals seemingly misplaced against generic EDM drops. My craving for something inventive and exciting ran deep.

“Lemonade” is the very first song by SOPHIE that my friends played for me. I was transfixed by the high-pitched robotic voice in the chorus. The lyrics seemed to mimic the bouncing bass that carries the song’s extravagant production: “It’s just that when I’m with you / and everything’s okay / I get that fizzy feeling / and I want lemonade!” Although I could parse out hooks that were reminiscent of early 2000’s pop, I’d never really heard anything else like it. The introspective yet tongue-in-cheek message of the song not only plays to its brilliance, it represents the mutating and evolving genre of pop music as we know it. To this day, the entirety of Product remains disruptive, transgressive, and out of this world.

In 2016, SOPHIE and Charli XCX collaborated on Charli’s EP titled Vroom Vroom, and the landscape of pop changed forever. In his video essay on Charli XCX’s trajectory and impact on pop, music journalist and video content creator Noah Simon says, “Vroom Vroom was a groundbreaking collection of experimental dance pop songs that showed Charli had chosen to sacrifice a genuine mainstream presence for something far greater.” Infused with dark moodiness and trap-infused beats, three of the four tracks on the EP (“Vroom Vroom,” “Trophy,” and “Secret [Shh]) are defined by SOPHIE’s signature sound: bubblegum bass meshed with industrial beats. The remaining track “Paradise” features singer Hannah Diamond, and represents a different yet just as iconic characteristic of SOPHIE’s recognizable style. The song is sparkly and sugary-sweet, and the majority of the vocals are so pitched they are inhuman.

SOPHIE released Oil of Every Pearl’s Un-Insides, her most polished and expansive record, in 2018. From heavy-hitting tracks like “Ponyboy” and “Faceshopping,” to softer and more vulnerable moments like “It’s Okay To Cry” and “Is It Cold In The Water?,” this album solidified her role as a visionary. Up until this major release, SOPHIE evaded the limelight. During the Product era, she hardly sang on her tracks, if any at all. While she still features the vocals of other artists on Oil of Every Pearl’s Un-Insides, her voice can be heard on most of the songs on the album in both a lead and background role. In her 2018 interview with Tracks (her first TV interview ever), SOPHIE responded to the attention “It’s Okay To Cry” garnered from the media, saying, “I was quite disappointed in a lot of ways with the way it was received because it displayed a lot of the hang ups people have around requiring an image to be attached with music. I just felt like I could use my body more as a material, as something to express through, and not something to fight against. That was really the shift.”

“Immaterial” features the vocals of Caila Thompson-Hannan’s solo project Cecile Believe, and is one of the most popular songs on Oil of Every Pearl’s Un-Insides. Although its lyrics may initially seem chaotic and potentially arbitrary (“You could be me and I could be you / Always the same and never the same / Day by day, life after life / Without my legs or my hair / Without my genes or my blood / With no name and with no type of story / Where do I live? Tell me, where do I exist?”), I hear poetry. I hear somebody who is frantically trying to make out their own image in a mirror covered with sludge, somebody who is clawing through their dysphoria to carve out their own reflection. To carve out the possibility for a new life. Perhaps this is just my projection, but after reading journalist Harron Walker’s gorgeous piece “Sophie Made You Feel,” I don’t feel like I’m alone. When I listen to “Immaterial” now, I can’t help but tear up.

I was lucky enough to see SOPHIE perform twice in 2018, once at Ladyfag’s music festival LADYLAND, and another time at Brooklyn Steel. Of the two performances, I preferred the show at Brooklyn Steel. The audience was packed with superfans, and never has being bounced around in a sea of bodies felt so intimate. We pulsed together as SOPHIE stood in the stage lights, the silhouette of her body outlining green and purple lasers darting from behind her.

A couple of months before SOPHIE’s devastating and untimely death, I’d been texting with my friends about the emerging sub-genre of pop often referred to as “Hyperpop.” While it’s difficult to pinpoint its exact origins, it can be traced back to the early 2010’s right around the time that Grimes released her debut studio album Geidi Primes, and when the PC Music record label and collective, which SOPHIE was affiliated with, was formed. After the release of Vroom Vroom, many listeners considered Charli XCX the face of hyperpop; yet SOPHIE was the genre’s locus. Apart from Charli XCX, SOPHIE has produced for a variety of artists including Madonna, Kim Petras, Vince Staples, and more. In 2019, Spotify released a Hyperpop playlist that went viral, including many tracks produced and influenced by SOPHIE, which helped the genre reach more mainstream audiences than ever before.

Hyperpop is vibrant, fluid, and sardonic yet earnest. It explores and exaggerates many tropes in the mainstream. The expression of hyper-sexualized femininity of pop stars is one of the tropes hyperpop often analyzes, which is reflected in SOPHIE’s vocal experimentation throughout her discography. Perhaps what’s most exciting about the genre is that many of its performers, like Dorian Electra and Rina Sawayama, are queer. More specifically, many artists fall within the trans umbrella, including SOPHIE. As such, there are many queer aesthetics and visuals associated with hyperpop—especially extreme campiness, which subverts and disrupts the pop formula as we’ve understood it.

I still remember how I felt the day that I was introduced to SOPHIE. I could somehow visualize myself reflected in her music. I felt seen and illuminated by the vibrance. By the messiness. Listening to SOPHIE is like staring into the slick, oily abyss of gender dysphoria and for the first time, finding something to celebrate within it: its fluid nature, and its endlessness. Her music made has escape for her queer and trans listeners feel possible—a momentary escape from the cis-hetero structures that make up so many of our worlds and realities. In author Sasha Geffen’s review of Oil of Every Pearl’s Un-Insides in Pitchfork, they wrap up by saying, “When, on ‘Whole New World,’ the distorted, feminized voices that have become her trademark shout out the song’s title one syllable at a time—‘whole’ new! world!’—it sounds almost like a manifesto, a political demand. It sounds like the kind of phrase you’d shout in a crowd while clamoring for the freedom to be whatever it is you already are.”

When I’m scouring the depths of YouTube and SoundCloud for new music, I’m often searching for the maximalist and sybaritic effusiveness in pop that SOPHIE made familiar. With newer acts on the scene like the duo food house, and established artists experimenting with the genre like Rico Nasty on her latest album Nightmare Vacation, largely produced by Dylan Brady of 100 Gecs, the future of hyperpop seems to be in good hands. In their recent track “mos thoser,” food house says, “No more gods / only SOPHIE / Y’all know God is trans so let’s pray to her and stream ‘Trophy!’”

On January 30, 2021, SOPHIE passed away in Athens, Greece, as she climbed to see the full moon and accidentally fell. While I’m hesitant to portray her tragic death as poetic, I hope she got to savor the moon. I hope it was big, beautiful, and glimmering.

If you’re mourning the loss of SOPHIE, be sure to check out SOPHIEfest: a virtual festival and fundraiser featuring 50+ performers honoring SOPHIE’s life taking place on February 27th at 8pm CST. More information will be coming soon, so stay tuned!

Caelan Ernest is a poet, performer, and thingamajig living in Brooklyn, NY. Their work considers seriality as a model to explore how digital topias allow the queer body to undergo multiple puberties. Their work has been published or is forthcoming in Hayden’s Ferry Review, BAEST, We Want It All: An Anthology of Radical Trans Poetics (Nightboat Books, 2020), The Poetry Project’s House Party, The Felt, and more. They hold an MFA in Writing from Pratt Institute. They are Director of Publicity at Nightboat Books. Hit them (and their cat named Salad) up on social media: @transputation.