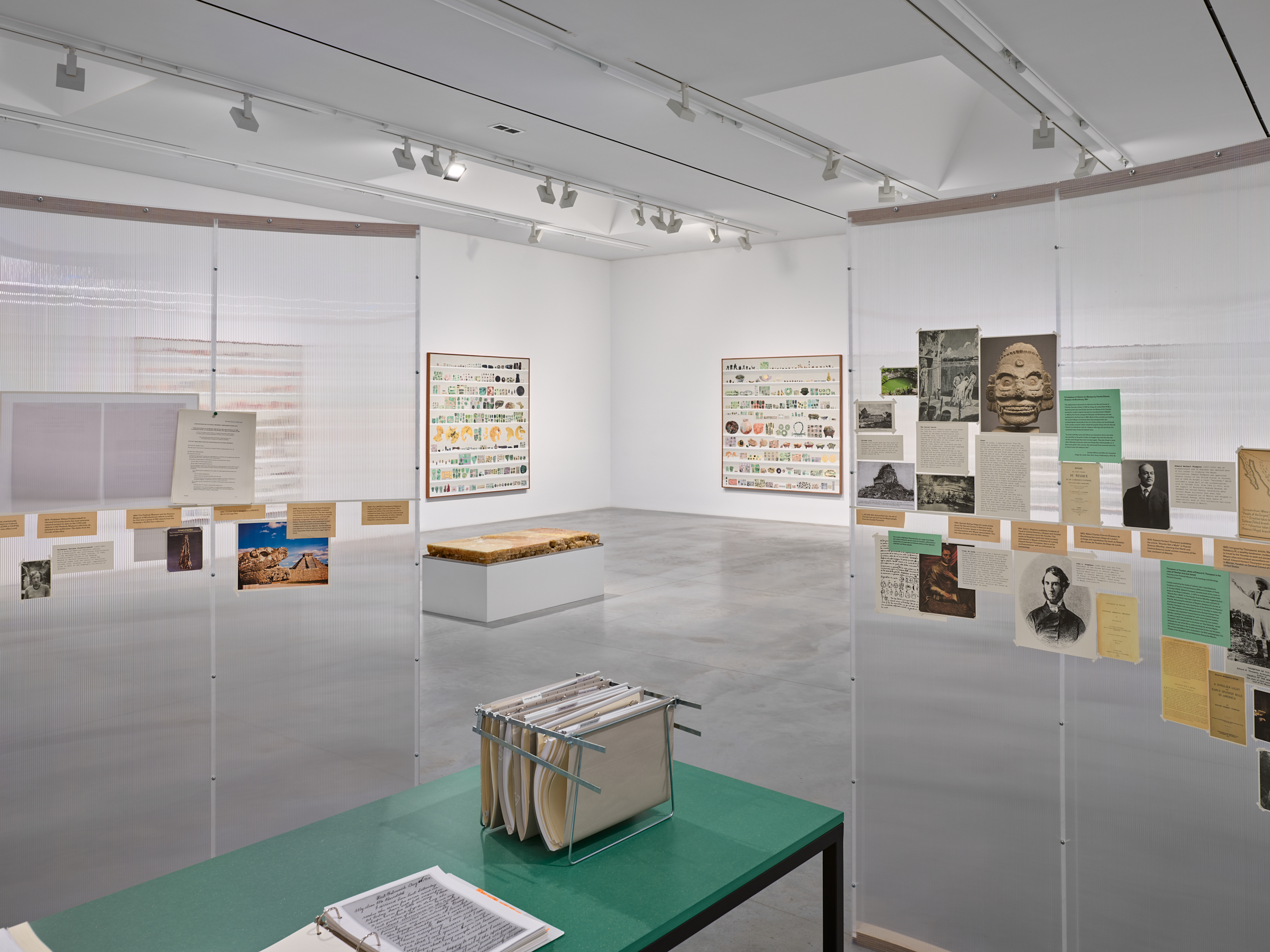 “I am interested in objects suspended from their original function and purpose by being stored and displayed in institutions solely as historical objects,” the artist Gala Porras-Kim writes in a letter to Harvard’s Peabody Museum of Archeology and Ethnology. The letter is both a work of art by Porras-Kim and an inquiry into the status of countless other works, made not by her but the Mayan people in the land surrounding Chichén Itza, as offerings to their rain god Chaac. Those familiar with Porras-Kim might read a special, spectral quality into her use of the word “historical,” as though in rendering these objects “solely” this way the museum has done something to them, taken something else away. 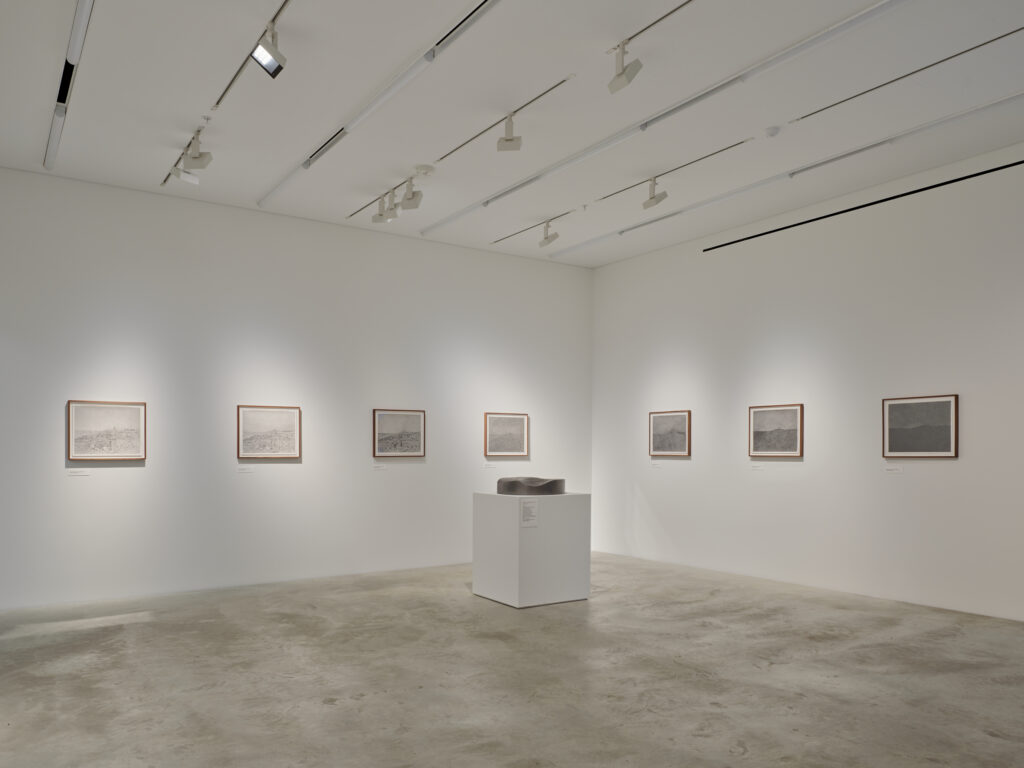 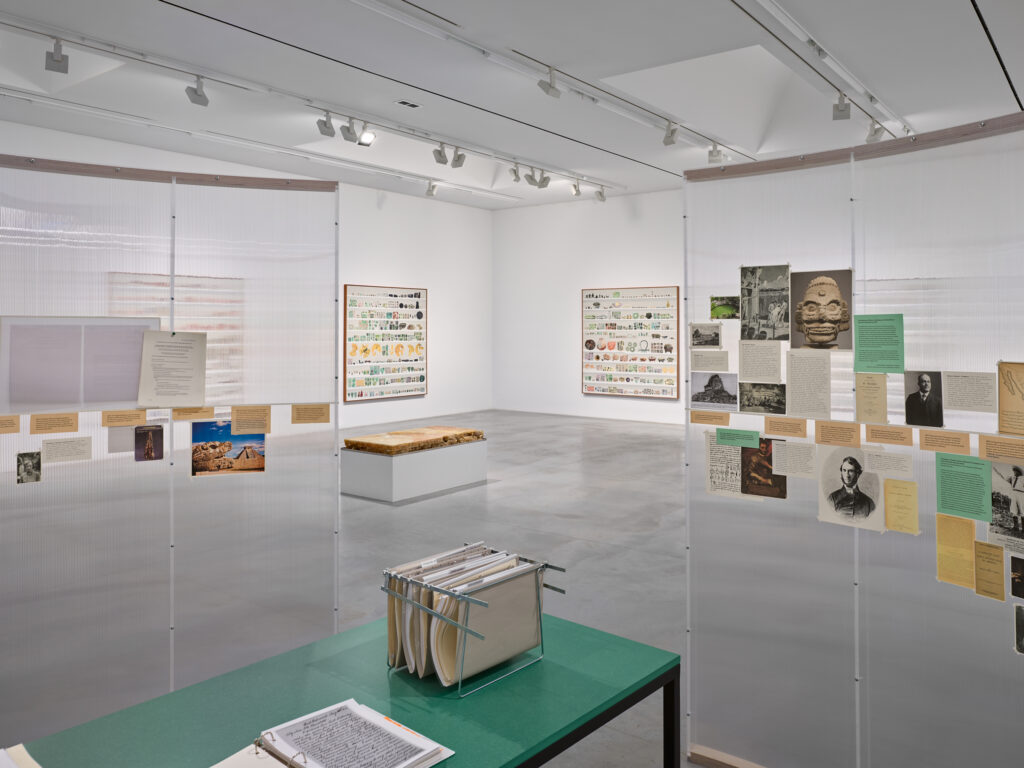 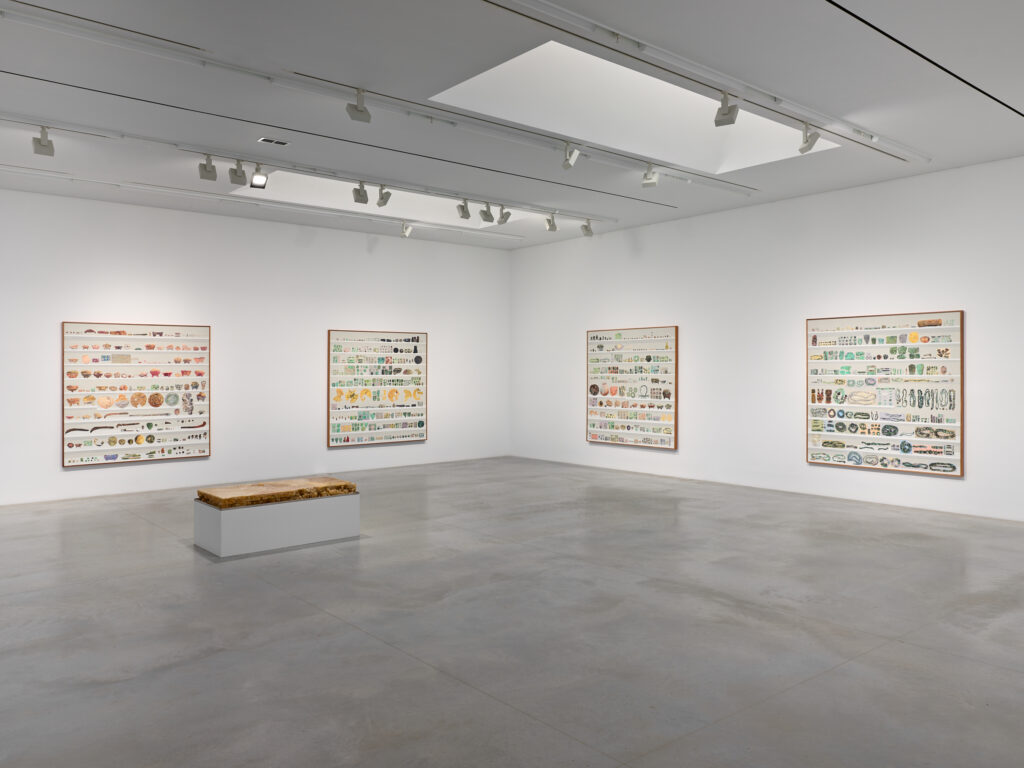 Colonialism, collecting, and the hegemony of the archive are the subjects of Porras-Kim’s solo exhibition at Amant, titled “Precipitation for an Arid Landscape” (through March 13). Born in Bogotá, Colombia and currently based in Los Angeles, much of her work can be understood as a research of research: delving into the minutia of museum practices, storage management, and preservation techniques to get at the assumptions which undergird our institutional archives. As she deftly demonstrates here, such anthropological practices form the bedrock of the West’s self-ascribed dominance regarding the way it relates to other cultures, both living and dead. In the off-limits, dust-ridden back rooms of the Harvard Peabody Museum, purportedly objective scientific practices rip artifacts from their specific functions and sacral bonds, distilling them into objects of study which, paradoxically, usually entails forgetting about them on shelves and in drawers. In making these practices her object of study in turn, Porras-Kim puts anthropology under an anthropologist’s lens.

The exhibition is perfect for Amant, a self-described “non-collecting institution that fosters experimentation and dialogue,” with austere facilities newly designed by SO-IL. Spread perpendicularly across three blocks in industrial East Williamsburg, the exhibition space is non-hierarchical—so much so that they do not have a main entrance. I came in through the 315 Maujer Street side, putting me in contact first with Porras-Kim’s Asymptote Toward an Ambiguous Horizon (2021), a collection of graphite drawings depicting the Neolithic Göbekli Tepe UNESCO World Heritage site in present day southern Turkey. This excavated remnant of early Mesopotamia is presented here in twelve delicately rendered grisaille drawings, depicting the different ways light strikes the site over two-hour intervals on a full, largely cloudless day. Canny fact-checkers will note that Porras-Kim’s perspective of the site closely matches the hero image from the Göbekli Tepe Wikipedia article, uploaded by user Teomancimit in 2011. 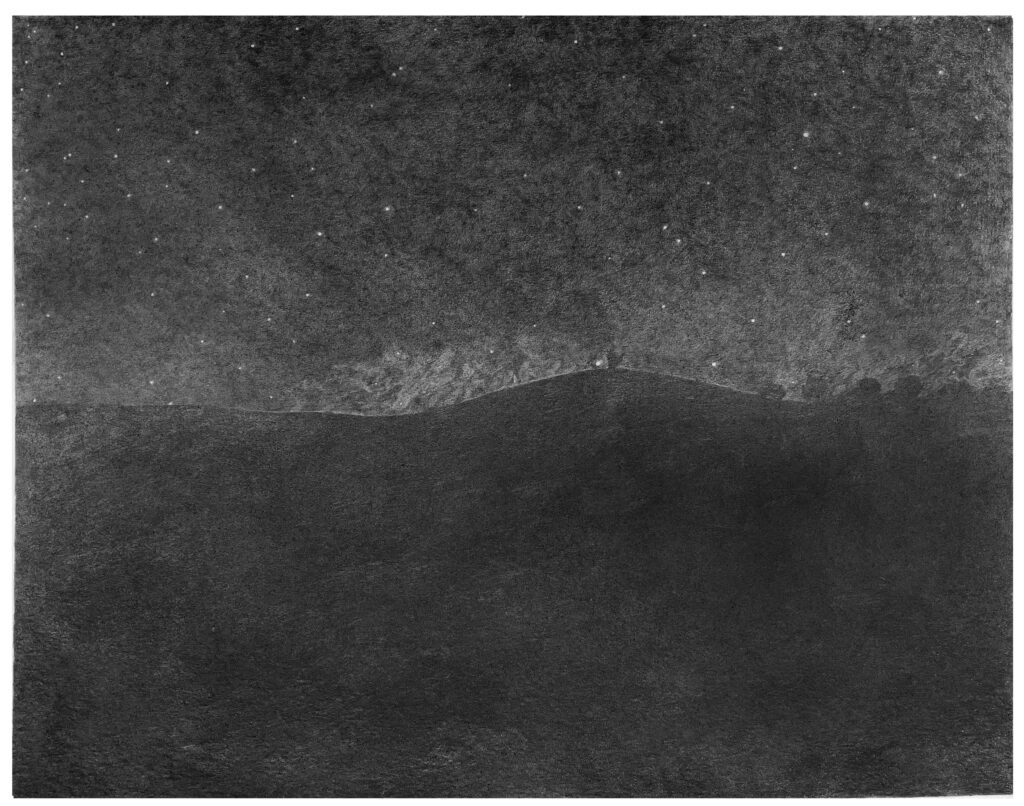 “Asymptote Towards an Ambiguous Horizon, 2am” 2020, courtesy Amant Foundation 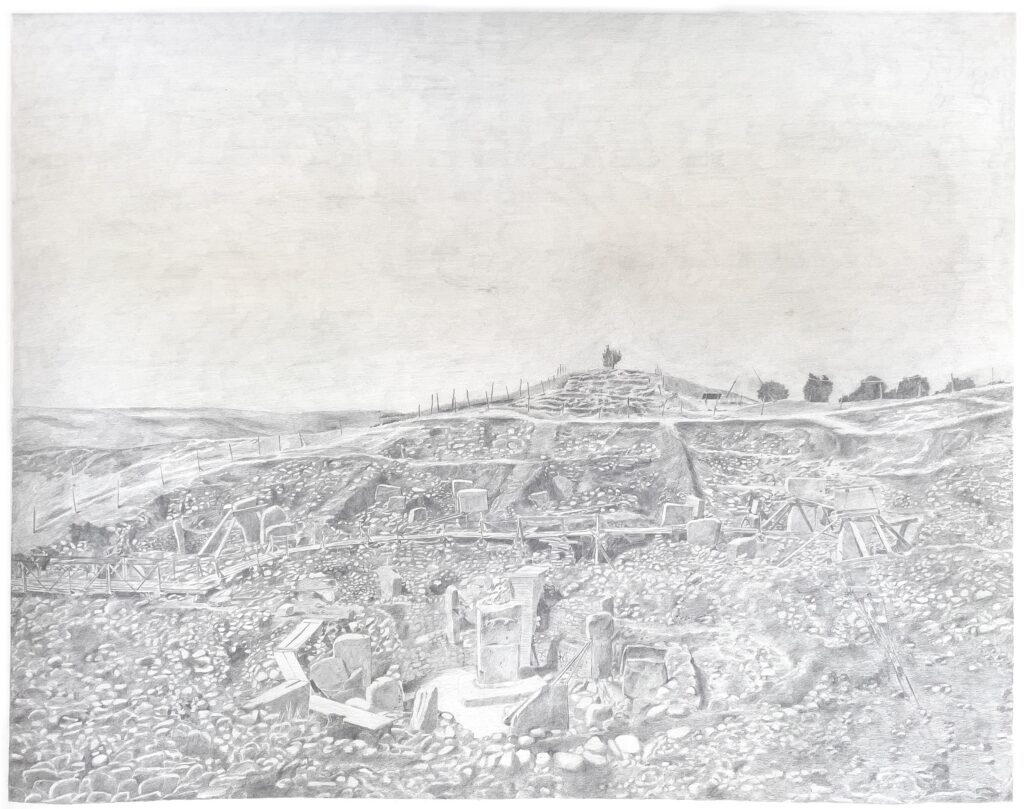 Here, we see the first of Porras-Kim’s attempts to dis/reorient us. Twelve different perspectives – ostensibly from the same viewpoint, and remade painstakingly over and over by hand under various constraints of light and shadow – render a supposedly fixed, even epitomic interpretation of a place into multiple contexts at once. There is no one instance or vantage from which to understand an object. As if underscoring this, wall text notes that her constant use of a northwest-facing viewpoint at the dig site is countered by “twelve changing depictions of how the south-facing sky looked 12,000 years ago.” What? Why record the sky about the site as seen from an (almost) perpendicular perspective as the position on the ground? How does a sky from 12,000 years ago look different from the sky today? And how would we know? These sort of disorienting impositions, both strictly deliberate and seemingly arbitrary, further decenter our initially comfortable understanding of what it is we are looking at.

As with her graphite drawings, everything in the show bears traces of Porras-Kim’s own technically talented hand. This is the secret to the show’s great success. While institutional critique has increasingly become the domain of the visual artist, new works created in this methodology often tend to involve screen-printing or otherwise blowing up legal documents to highlight information previously obscured from the public eye (e.g. Hans Haacke’s Solomon R. Guggenheim Museum Board of Trustees, 1974).  In some cases, like those of the artist Cameron Rowland, it even involves creating new legal documents, which complicate the museum’s material presence and evoke the social hierarchies leading to its existence. These histories make artistry out of the corporate memo, an exposure of neoliberal power practices that becomes strangely reinforcing of them. In pursuing institutional critique with graphite, colored pencil, plaster and acrylic paint, Porras-Kim offers a radical re-insistence of the values of handiwork, and reminds us that the basis of collecting practices still center around objects that are cherished, unique, and beautiful to look at.

This is presented most clearly inside the largest gallery space at Amant, where the eponymous Precipitation for an Arid Landscape, 2021, hangs. Seven large canvases minutely recreate in colored pencil and flashe the artifacts uncovered from the Sacred Cenote at Chichén Itza, in present day Mexico. A deep natural well, used as the Mayans central offering site to Chaac, the cenote was noted as a place of ritual, and a point of human sacrifice, by the earliest Western observers following Spanish conquista, and speculated about from the very beginning as a possible search point in the colonizer’s obsessive quest for gold. By the late nineteenth century, an analogous version of this quest was reinstated by American archaeologist E. H. Thompson, who purchased land surrounding the site just a few years before the implementation of a new law granting ownership of historical artifacts uncovered on Mexican soil to the state. Thompson began dredging the sinkhole around 1904, using pulleys, winches, and extensive diving to remove from the waters what had been sacrificed there centuries earlier, and shipping the loot in violation of international law to his financial backers at Harvard’s Peabody Museum. As nearly all the objects brought up from the cenote were conditionally affected in some way by the water, the Peabody’s first museum director specified to keep them wet at all times, wrapping them in damp towels and sealing them in crates so that they did not deteriorate completely during the smuggling process.

This historical backdrop is extensively documented in an enclosed study-space in the large gallery, on whose curved plastic walls hangs a detailed timeline of the cenote’s “discovery” by the Spaniards and subsequent dredging by the Americans. The mock studiolo wryly physicalizes the research Porras-Kim does in her work surrounding her art – much of which was recently carried out while she was a Fellow at the Radcliffe Institute for Advanced Studies at Harvard – but the emphasis of the exhibition space rests squarely on her seven paintings. They are gorgeous, passionately rendered, and delicately detailed: a feast for the eyes.

Is there an intentional irony here? While much of Porras-Kim’s broader institutional critique decries the removal of sacred objects from their sites of former (and, she implies, continual) activation, her central work – the thing she was just featured for on the cover of Artforum – is to replicate the bright, hermetic archives wherein these objects exist, transposing the real-life phenomena of history into the realm of the ideal. What to make of an artist whose trompe l’oeil shelves and white backgrounds not only strive to reinforce the artifacts as such, but to count and catalogue them, placing them in the same denatured space as the archaeologists did? There is no gesture here to the darkness of the sinkhole, or to the mud of time. And yet, in her letter to the Director of the Peabody Museum, Porras-Kim plangently appeals for the objects to be returned to their prior conditions of submersion and wetness—factors which contributed to their preservation until recovery, and “permanently changed their composition” in the process. Here, we learn that the arid environment evoked by her title is that of the archive, “one of the driest environments in which [these objects] can exist. […] Their current condition as historical artifacts makes it difficult to realize their purpose with the rain.”

Is Porras-Kim serious when she says, “regarding the provenance of these objects,” that “their owner, the rain, is still around.”? Why shouldn’t she be? These objects were made as votive offerings to Chaac, and were thrown into waters sixty feet below the Earth’s surface, clearly never meant to be retrieved. If they were not created expressly for the purpose of bringing the Mayan people rain, they were certainly discarded with that purpose. To place them now in an arid environment is a violation of the intentions and sacred beliefs of the people who put them there—intentions archaeologists never stopped to question in their quest to understand them. As writings by the early missionaries of conquest show, there was also nothing “ancient,” or forgotten about these practices—they existed through the arrival of the colonizer, and their only point of rupture was our own. To deny these cultures the validity of their ritual beliefs, therefore, is to further extinguish them, making them the subject of a history that Western civilization is determined to forget, the better to discover it again later.

In all her work, from her expertly homespun renderings of the archival, to her quiet contradictions between spiritualism and institutionalism, Gala Porras-Kim asks questions that everyone should be asking themselves: At what point does an object—or our entire understanding of a people—become “historical”? How does this designation change the way we care for, handle, and understand recovered objects, be they ritual offerings or human remains? And whose history do they support and inspire? Everywhere today, in an age of reparations, repatriations, unmet demands and unproductive guilt, people are asking themselves these questions for the first or thousandth time. Rarely have we had a better opportunity to visualize their specificities and imagine their answers.