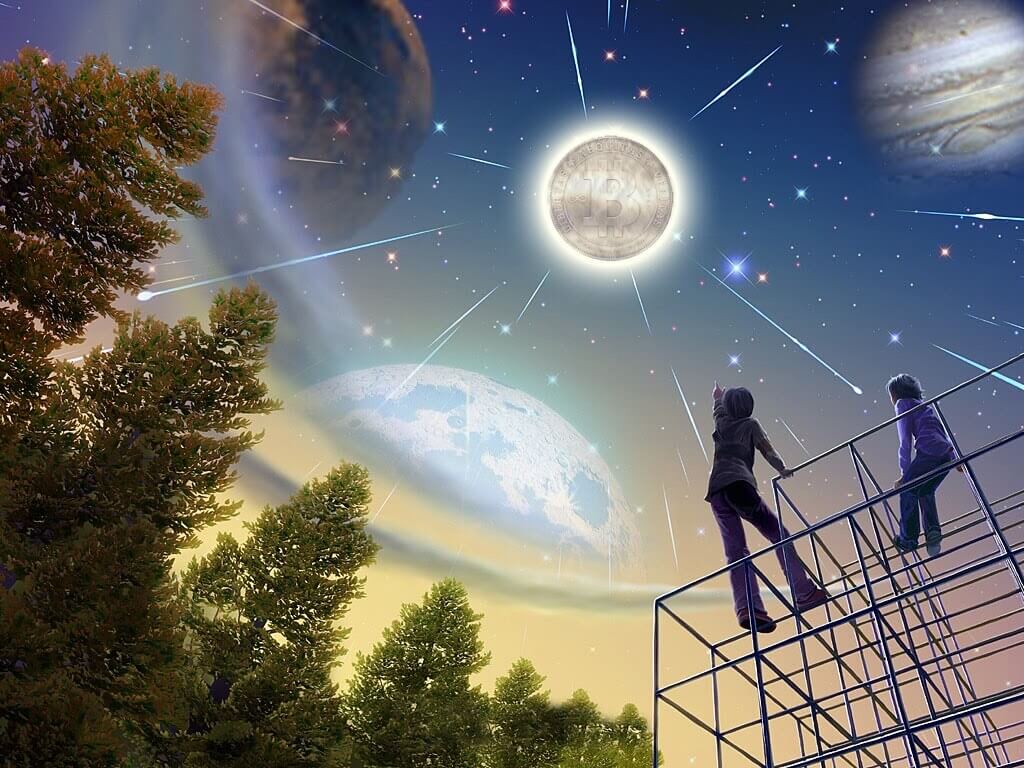 In the infancy of the internet, it was thought by some that we were on the brink of a global communist revolution, as new technologies for sharing would obviate the need for private property. This belief seemed as logical then as it does delusional now; thirty years on, we live in an age with a greater concentration of wealth in fewer hands than ever before, largely because the internet provided new, unregulated terrain for market expansion. But the mandate of the web when it was created was to share documents and information as easily as possible—mainly through hypertext, the bedrock of web navigation still, which emphasizes easy, self-motivated discovery. And this has been an outright success, so much so that we no longer think of digital files in terms of originals and copies. There may, of course, be an original image—if it was a photograph, it was taken by someone, somewhere—but there is no original .jpeg, no original .mp3 or .mp4. Each copy is as authentic as the last, and provided you have enough storage space, each copy can be infinitely copied in turn. In this sense, the Marxists were not entirely wrong. While private ownership and patronage of art have not fallen out of fashion, they no longer mean what they once did, as entire generations have grown up believing that images and text are meant to be freely shared.

How, then, to explain the phenomenon of the non-fungible token, or NFT; the fad of blockchain ledgers which attempt to replicate the constraints of physical ownership on born-digital objects? In the context of the internet as a technology for radical sharing, it sounds like a bad joke—and it’s no accident that much of the attention lavished upon NFTs at this point involves the kind of sophomoric humor which is native to the web, from a remastered version of the classic Nyan Cat GIF selling for just over $500 thousand on Foundation to a Christie’s sale of Beeple’s dystopian web-collage work for a conspicuous $69 million. This latter sale, in particular, has yanked the art world headfirst into the realm of non-fungible tokens, and with good reason: Beeple’s Everydays: The First 5,000 Days is now considered to be the third-most expensive auction of a work by a living artist, and signals the recognition by a major, old-guard institution like Christie’s of both the financial viability of cryptocurrency and the aesthetic legitimacy of born-digital art. The NFT, a proof-of-ownership token on the Ethereum platform that verifies the authenticity and irreplaceability of a “digital object,” is the synthesis of these two legitimations.

The most confounding thing about NFTs is how their purchase has nothing to do with ownership—at least ownership in the traditional sense of the word. Looking into the Beeple sale, I at first assumed that the work—shown on Christie’s website as a composite portrait of 5,000 daily digital drawings—would bequeath the owner alone access to each high-res piece, with details that the average non-millionaire could only squint at. In fact, Christie’s sold only the composite itself, a 21,069×21,069-pixel image (at a shockingly low file size of 319MB), which is equivalent to the level of detail one could see using the auction house’s “Super Zoom” feature on the lot page. High-res images of each day’s drawings are available to the public on Beeple’s website, and, as Ben Davis notes on Artnet, many are better seen only at a distance. The media details of the Nyan Cat NFT are listed as 1400×1400 pixels and 12 frames – exactly what anyone who visits the Foundation webpage will see when they click on the GIF (although Foundation states that the only the owner will get the increased “stats” of “Charisma +10 / Luck +10 / Happiness +15” – a bargain at a half a million USD). Right-click the GIF, and the standard HTML “Save Video As…” feature comes up, free for anyone to use.

Why buy these overwhelmingly public images, then, when a claim to ownership includes none of the traditional rights? The cryptotraders who champion NFTs usually offer up two reasons: clout and altruism, both of which sound a little dubious to me, if not in outright opposition to one another. As far as basic economics go, value relies on the impression of scarcity, and these images, in their infinitude, are the opposite of scarce. I would propose another scenario for the immense interest and flurry of cash-flow around these tokens, which is an interest in cash-flow itself. While the objects which are purportedly being bought and sold are not limited, the chances to be first or biggest, to set a record and make headlines, are. The NFT frenzy in fact represents a bubble of activity among cryptotraders all trying to draw attention, and buy-in, to the very currencies they have been buying into for years.

The Beeple sale, though it may be confused as significant from an art-historical perspective, is a prime example of this speculation game. The Washington Post recently reported that the buyer of Everydays, a pseudonymous crypto-investor named MetaKovans, recently benefited from a rally of a cryptocurrency he had coined, which offers buyers micro-shares of individual Beeple NFTs MetaKovans has already owned for years. As the price for Everydays skyrocketed, the rest of the artist’s “stock” naturally appreciated in value as well, and MetaKovans got a nice return on his investment, in the tens of millions of dollars. This would be, in any other economic environment, a cross between insider trading and arbitrage; but of course there’s always a little wiggle room in standards of valuation for currencies you have invented yourself.

In their booms and busts, their attention-grabbing inflation and surprising longevity, cryptocurrencies have proved themselves to millions as a viable derivation of wealth. NFTs, at least from the perspective of some of their biggest patrons, are just a more arbitrary derivative of that derivative, with the added benefit of being attached to some aesthetic object that might be funny or shocking or silly or cute. While this new form of market speculation offers a seemingly endless variety of ways to convert and manipulate wealth, it has relatively little to do with the art it purports to value. And yet, the discourse that has risen up in response to a few attention-grabbing sales is about far more than just money. It’s possible to see, amidst the chaos, the awesome promise of the technology itself—a new frontier free from the aesthetic constraints and systemic exclusivity of the contemporary art world.

This tantalizing freedom is the reason NFT fever has begun spreading outside the investment class, and it’s hard to deny the appeal. The contemporary art market is heinously flawed: as obsequious to the smell of money as it is addicted to scandal and shock, inveterately racist and rooted in imperial cultural theft. Imagine if blockchain could change all that, or at least allow us to forget about it? Much like the early internet, the technology arrives with the radical promise of an exit, seemingly built right into the software. Here is a chance to finally get on the same page, deciding as a quorum, through the distributed ledger, what’s really worth valuing in our conception of beauty, and what we’re finally ready to leave behind. Or at least that’s the utopian version; I don’t have to tell you what happened to the revolution last time.

In many ways, NFTs remind me of the fraught mission to terraform Mars, and not just because Elon Musk is obsessed with both. The tokens are an aesthetic, microcosmic version of the same gambit, substituting cyberspace for outer space. In both cases, those who hold the new technology are making the same simple appeal: The world we have now sucks, and it doesn’t seem like it’s getting better. Wouldn’t it be easier to just take off? Sometimes it seems like it would be. In moments of despair, we burnish the dream of escape velocity, the allure of another atmosphere, one that we can create and control. But the reason why both scenarios are gambits is because to fully embrace a new world means giving up on the old. Blockchain, in making a more inhabitable, safe, spectacular internet, actively damages the physical place it leaves behind, and not only with the foreclosure of brick-and-mortar gallery spaces. Because the entire Ethereum network is run, at least at this point, on an energy-intensive Proof-of-Work platform, simply minting an NFT can be equivalent to a person’s power consumption for an entire month. If we really want to commit to using this new system, it won’t be long before we’ll have to start moving to Mars.

In the meantime, the old world dies. The old ways die. Gallery real-estate collapses like retail in the age of online shopping. The big museums start appealing to the lowest common denominator in order to keep their ticket revenues up. Maybe these institutions weren’t worth saving in the first place. Maybe we really can make something better if we wipe the slate clean. But, just as the utopian Marxism of the early internet gave way to a data-mining plutocracy—and as Christie’s is already endeavoring to show us in hosting the Beeple auction—the same people, and the same market, tend to crop up wherever civilization boldly goes. Even when reaching escape velocity, we can never escape ourselves.

Nolan Kelly is a critic, writer and media theorist based in Brooklyn, New York. He studied media and creative writing at The New School, and his work has been published in Hyperallergic, The Brooklyn Rail, and No.3 Magazine, among others.